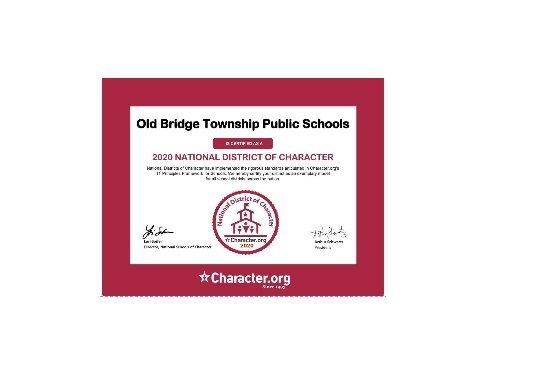 According to Lori Soifer, director of Schools of Character, national certification is the highest level of distinction bestowed by Character.org, a national non-profit group based in Washington, DC that supports the advancement of character development in schools, communities, and workplaces across the US and globally.

“Districts receiving this designation have demonstrated excellence in establishing a district-wide culture that exemplifies and brings to life The 11 Principles Framework for Schools: A Guide to Cultivating a Culture of Character,” said Soifer. Character.org is widely known for its 11 Principles, a comprehensive framework developed by school leaders and character development researchers.

Founded in 1993, Character.org provides the voice, visibility, and resources for educators to build nurturing and supportive school cultures that focus on core values and character strengths vital to student and school success. During the past 20 years, more than 900 schools and school districts – after an independent and rigorous evaluation process – have been certified a National School of Character.

Five years ago, Old Bridge Township Public Schools was named one of three National Districts of Character in the United States by Character.org (formerly The Character Education Partnership), who selects schools and districts that demonstrate that their focus on character development has had a positive impact on academic achievement, student behavior, and school climate. Selected schools are expected to serve as models for other schools, helping them to achieve the same results.

“The recognition to be recertified as a National District of Character speaks to the desire of this community to want the best possible environment for their children to learn and live,” said Schools Superintendent David Cittadino. “We are especially happy for every educator, staff member, family, and local resource that made this possible. During these most difficult times, Old Bridge once again rises above the despondency to be recognized as a community that believes in the power of positivity.”

“Receiving this national recognition is an honor achieved by a team effort across the district,” said Hoeker. “Our first school of character was recognized in 2010. It is a true testament to the desire of the community to put social emotional learning in the forefront and to teach and expect kindness and tolerance, to which we have sustained for 10 years. We continue to overcome challenges and rise above adversity because of the foundation we have established which started with this process and continues through the work of our staff, students, parents, and our community.”

After learning Old Bridge High School was recertified, Principal Vincent Sasso said: “The Character Education Team did an amazing job capturing the true spirit of our OBHS family. The compassion and generosity of our school community is second to none. I am so blessed and thankful to be a part of this journey.”

“I am once again both grateful and proud to be part of the Memorial team and community,” he said. “It is a great accomplishment for our students, staff and community.”

Southwood Principal Karen Foley said: “It is an honor to be recognized as a 2020 National School of Character and it is a privilege to work alongside the students, staff, and parents of Southwood School.”

Character.org, certified 84 schools and 7 districts in 15 states as National Schools of Character for 2020.

“Miller School is honored and humbled to once again be designated a National School of Character,” said Miller School Principal Kim Giles. “This honor is shared by all members of our Miller School community. Working together we focus on good character daily. We will continue to always make good character a priority at our school.”

Arthur Schwartz, president of Character.org, said the organization was pleased to announce and celebrate the schools and school districts who have earned this national recognition.

“Each of these schools and school districts has put in place a comprehensive approach to help their students understand, care about, and consistently practice the core values that will enable them to flourish in school, in relationships, in the workplace, and as citizens,” he said.

“The educators at these schools are inspiring their students to treat all people with respect and dignity,” she said. “They are teaching their students to be honest and trustworthy, to contribute their time and talents to the common good, and when necessary, to show the courage to stand up for what is right.”

Carpenter Principal Christopher McCue said he too was “extremely honored to receive this recognition for the second time. I am proud to work in a school with a group of teachers and students who understand the importance of Character Education and model it on a daily basis.”

Character.org will honor the 2020 National Schools of Character during its next National Forum.